Constitution For The People, Inc.

Tribute to Gene Montenieri – Service Above Self

I would dare say if asked our 30 Rotarians in the Rotary Club of Naples Bay could you name a person whom you felt just should be a Rotarian. When you talked with the person, he/she clearly demonstrated the things Rotarians say and do: Is it the truth? Is it fair to all concerned? Will it build goodwill and better friendships? Will it be beneficial to all concerned? Once you dug a little deeper you observed the person you named had a keen interest in “Service” and kept wondering the person is not in Rotary.

I know one such person who clearly put Service About Self. It is with great honor and admiration I shall with you Gene Montenieri had that Rotary Spirit in everything he did. Gene helped Veterans, was actively involved in numerous organizations such as the Grace For Veterans, led and chaired numerous committees on the Estero Chamber of Commerce, and of course, people figured Gene’s middle name was “Volunteer” because he was always volunteering for everything that would have a positive impact within the community and society.

I failed to ask Gene to become a Rotarian despite the numerous time we met at so many community events and I saw him everywhere from the Florida Golf Course University to K-12 public and private schools, and while he was organizing events in the Southwest Florida Community to make life so much better for others. On March 25, 2022, I made my reservation for Connecticut to Honor my dear friend Gene Montenieri and yet I did not find the time to ask him to join the greatest service organization in the world which as we know is Rotary International. 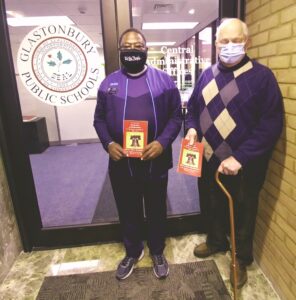 As I am now typing out this article, while in Gene’s birthplace of Glastonbury, Connecticut, after delivering the first one hundred of 15,000 United States Constitution Booklets on the way to the Constitution State in his honor, to the Naubuc Elementary School; I suddenly realized that I worked so closely with Gene that our organization to the point with his death on March 15, 2021, we honored him as the first Emeritus Director of the Constitution For The People, Inc.

Yet, I failed to take the moment to ask him to be a member of the Rotary Club of Naples because truly Gene was about Service Above Self.